I seem to have been away from this space slightly longer than I anticipated. It was only a week – although it feels much longer than that – but I have a good excuse. You see, we went to Vegas for a few days and everyone knows what happens in Vegas…

END_OF_DOCUMENT_TOKEN_TO_BE_REPLACED

I am back at work today after a glorious holiday. I am tired (my flight was a bit delayed), cold (where is the sunshine?!) and a little bit grumpy (okay, quite a lot grumpy).

END_OF_DOCUMENT_TOKEN_TO_BE_REPLACED

A while ago, I made these ricotta gnocchi for the blog. I actually make them all the time; I love a meal that you can have on the table within a matter of minutes. The original recipe calls for plain flour but I’d been wondering for a while whether it would be possible to change it up a little and swap in some different flours.  END_OF_DOCUMENT_TOKEN_TO_BE_REPLACED

It is quite likely that whenever you read this post I will either just have eaten, just been about to eat or actually be eating one of these rice crispy treats. They’re pretty much my new most best thing ever.

When I was little, rice crispy treats were very simple. Melt some chocolate and some golden syrup, throw in your rice crispies and there you had it.

It’s only in recent years that rice crispy treats seem to have evolved into something much more complicated involving butter and marshmallows and goodness knows what else. And I have to admit that marshmallows, or at least shop-bought marshmallows, are one food that I’ve never really understood. They always seem so weirdly pointless and supremely unappealing.

So in the spirit of these simple rice crispy treats of my youth, these only contain three ingredients.  Well, four if you count the chocolate chips that I added which are optional but most definitely encouraged. 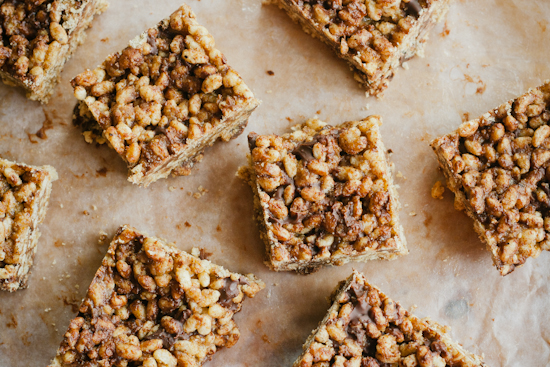 Now I do also realise that I’ve become slightly obsessed with nut butters of late but I finding it very hard to stop thinking about them. I promise I’ll stop soon (although I should point out for people in the UK that Ocado currently have cashew and almond butter on special offer if you want to join me in my obsession).  Hazelnut butter is probably my favourite but I think any type of nut butter would work equally well in these. Indeed the last batch I made contained a mixture of three different butters that I found lurking in my kitchen. Honey provides the stickiness here; I think you could use maple syrup but I tend to find that honey is stickier and therefore works slightly better. I like to stir the chocolate chips in when the mixture is still slightly warm so that they melt a little and end up with swathes of chocolate. The chocolate, when it hardens, also has the added benefit of helping to hold the whole thing together but it’s by no means essential, the nut butter and honey have more than enough sticking power.

I feel so much better about life when I have a batch of these on hand. They’re sweet enough to keep me happy but substantial enough that I don’t feel hungry within ten minutes of eating one. The fact that they are so easy and quick to make (seriously, I made the last batch in an advert break during CSI) is just an added bonus.

I prefer to store these in the fridge but they will last at room temperature for a bit too. 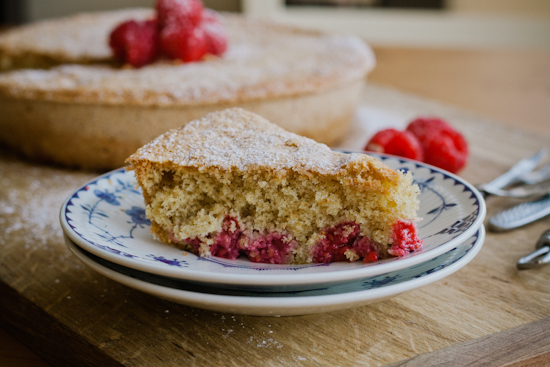